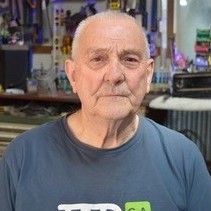 When Eric Siggurs retired in 2005, he did what most other retirees do – travelled and did jobs around the house. But after 47 years with an engineering company, he eventually grew tired of not contributing to society.

At age 70, he started volunteering for Technology for Ageing and Disability SA and has since spent more than 12 years in his shed inventing and making equipment to help people with disabilities be independent, rather than relying on services.

Eric’s contributed to more than 60 projects that have improved the lives of others.

Among the equipment he’s designed and built are parallel bars that can be attached to treadmills, allowing children with disabilities to exercise at home, and rotatable frames so that people can produce art.

He’s also designed and made equipment that has enabled children to go to the toilet without assistance and a ceiling-mounted pulley swing to support leg mobility.