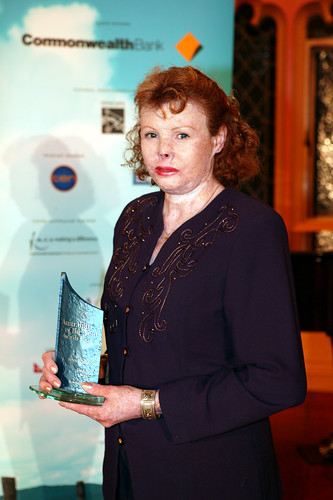 Sydney-born Donna Carson was a schoolteacher in Dubbo for fifteen years before she became a victim of domestic violence. During an argument in 1994 Carson’s then partner doused her with petrol and set her alight. She spent nearly six months in a hospital burns unit and fifteen months in rehabilitation before rebuilding her life as a volunteer advocate for victims of violent crime. Carson established a safe waiting room at the Taree Court House, where she provided guidance and support to women and children during court proceedings. She had the personal experience necessary to know what victims needed and her background in education meant she was able to communicate these needs to the relevant authorities.

Accepting her award Carson said, ‘It’s up to all of us to eliminate violence from our homes, our schools and our communities, joining together against this war of terror that rages in our own backyards.’

“Prior to winning the award, I was volunteering in three main areas: domestic violence campaigning; support for victims of crime and those going through the legal system; and working with burns survivors. Afterwards my profile was lifted and I was able to reach more people through training and education: schools, magistrates, conferences, police, nurses… it truly opened doors.

“Some of the incredible opportunities that I was given I never expected. In 2007, I co-wrote my story called Judas Kisses: A True Story of Betrayal and Survival, which is basically a help manual disguised as a story. And in 2009, artist Dave Thomas did a life-size painting of me as an entry into the Archibald Prize. It toured and started many conversations about my experience.

“My advice to future Local Heroes? You will be working a lot harder – but it’s thrilling work. You’re making a difference and that’s what counts.”