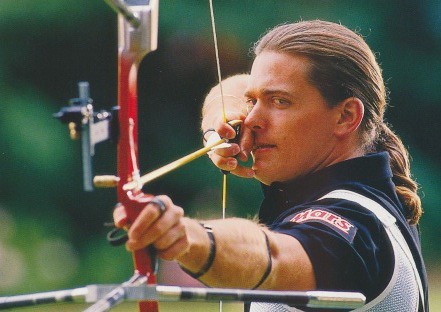 Adelaide-born Simon Fairweather trained himself in the sport of archery on his uncle’s farm at Strathalbyn in South Australia. As an eighteen-year-old he competed at the Seoul Olympic Games, but his standout performance came three years later at the World Target Archery Championships in Kraków, Poland. Fairweather won the gold medal and became the first Australian to win an archery world title; he also won the Asian Cup and claimed his fifth successive Australian title in 1991.

He was named Young Australian of the Year the following January. Despite disappointing results at an Olympic level during the 1990s, Fairweather persevered and won the individual gold medal in Sydney, equalling the Olympic record for an 18-arrow match. In 2001 he received a Medal of the Order of Australia for services to sport. Fairweather competed at five Olympic Games and won countless Australian titles. In 2009 Archery Australia appointed him the National Head Coach.