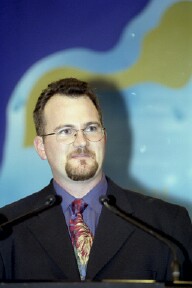 Scott Hocknull developed an enduring fascination for dinosaurs during his childhood in Darwin. After moving to Brisbane, he began working as a volunteer at the Queensland Museum and became a keen fossil hunter. At only sixteen he authored a scientific paper about a new species of freshwater bivalve mollusc. Hocknull continued his volunteer work while studying zoology at the University of Queensland and described ten new species by 2002. After graduating he was appointed Assistant Curator of Palaeontology at the Queensland Museum – the youngest person to hold such a position in Australia. He also commenced doctoral studies on the effects of changing climate on Australia’s ancient species. He hopes his findings will aid the conservation of Australia’s living species.

The Young Australian of the Year has subsequently authored several children’s books about dinosaurs. In 2009 he discovered three new species of Australian dinosaur, following a major fossil find near Winton in central Queensland.