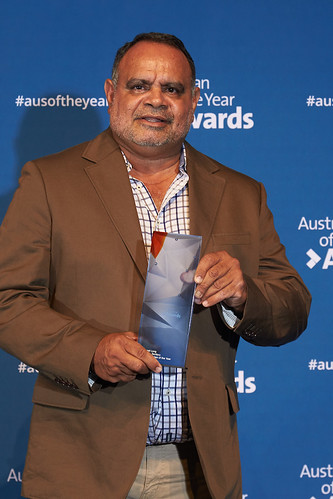 Darwin born, Michael Long uses his voice as an Australian Rules Football icon to fight against racism. In 2004, Michael embarked on 'The Long Walk' from his home in Melbourne to Canberra and established the Michael Long Learning and Leadership Centre in Darwin to put Indigenous issues on the national agenda.

Darwin born, Michael Long, Australian Rules Football icon is an advocate for reconciliation and fights against racism through the Michael Long Foundation supporting the ML Learning and Leadership centre and the Long Walk.

Michael played 190 games for Essendon, including two premiership wins. Awarded the Norm Smith Medal in 1993, Essendon include Michael in their 25 greatest players ever.

In 1995, following an on-field taunt, Michael made a stand which led to the AFL adopting a racial abuse code . In 2004, resolving to meet with Former Prime Minister John Howard to get Indigenous issues back on the national agenda, Michael embarked on 'The Long Walk', trekking 650km from his home in Melbourne all the way to Parliament House in Canberra.

Michael established the Michael Long Learning and Leadership Centre using the power of football to give young Indigenous Territorians opportunities for the future.

Today, Michael is working with the Essendon Football Club and The Long Walk Foundation to increase awareness of Indigenous culture and history. Through leadership, speaking out and hard work, Michael is tenacious in bringing real reform.