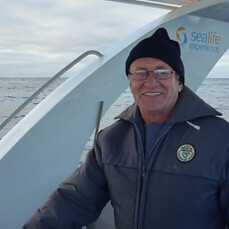 Mark Linfoot lost his wife of 35 years after she suffered a heart attack in the early hours of Boxing Day 2012.  Nine days later, the volunteer fire brigade chief from Eaglehawk Neck was fighting to save his community from the catastrophic bushfires that decimated parts of south-eastern Tasmania.  Mark had stood down from his position while he tried to come to terms with his loss, but nature had other ideas.  His brigade received its first call while at Charmaine’s wake on 3 January to attend a blaze at Stormlea; the following day the Forcett fire exploded only a few kilometres from Eaglehawk Neck.  The crew of 11 fought fires 18 hours a day for the next 10 days.  Mark is an exceptional example of a ‘quiet achiever’ who rolled up his sleeves and worked hard to help his community, despite his own grief.  Mark believes his wife would have wanted him to battle the blaze.