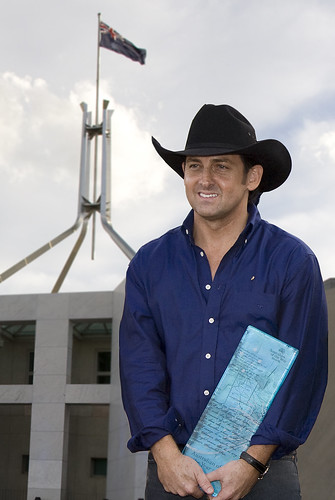 The son of a country singer and truck driver, Lee Kernaghan was born in the Victorian town of Corryong and raised in southern New South Wales. In 1986 Kernaghan travelled to the United States with his father Ray to represent Australia at the Nashville ‘Fan Fair’ country music festival. In 1993 his debut solo album The Outback Club won an ARIA award for Best Country Album and his hit single ‘Boys From the Bush’ topped the Australian country music charts. Kernaghan became a dominant figure in Australian country music; he subsequently released nine albums and claimed more ‘Golden Guitars’ at the Tamworth Country Music Festival than any other artist except the legendary Slim Dusty.

The Australian of the Year 2008 is well known for his support of rural and regional Australia; his ‘Pass the Hat Around’ tours have raised more than a million dollars for rural communities during a challenging period of drought.