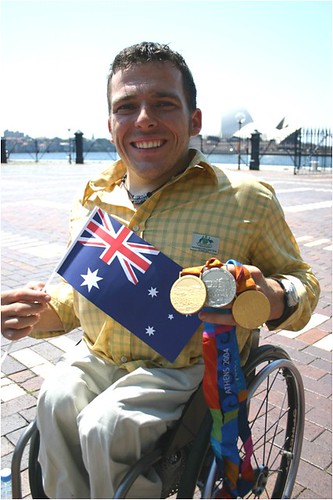 Born without the lower portion of his spine, as a child Kurt Fearnley ignored his disability and joined in every sport possible. At the age of 14 he took up wheelchair racing and has since become an elite international athlete. His never-say-die attitude is truly inspirational. Competing in the marathon at the Athens Paralympics, he pushed his chair for the last five kilometres on a flat tyre to win gold. Then during the New York marathon in 2006 he hit a pot hole at full speed and crashed face first, but still went on to set a course record. In 2007, he won 10 out of the 11 international marathons he competed in, breaking six course records in the process.

He is currently world champion in all five distances above 800m. Despite being disqualified in one final at the Paralympics in Beijing, given the wrong lane in another, and having his wheelchair bumped sideways down the track in a third, he took home one gold, two silver and a bronze medal. Kurt has an indomitable spirit and that is truly inspirational.