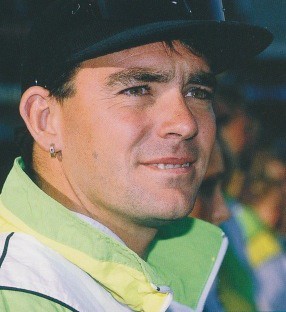 Brisbane-born Jon Sieben learnt to swim as a three-year-old and joined renowned swimming coach Laurie Lawrence in 1980. Sieben won a bronze medal in the 200m Butterfly at the Brisbane Commonwealth Games in 1982. Two years later at the Los Angeles Olympics, he was given little chance of claiming gold. He was considerably shorter than his West German rival, world record holder Michael Gross, who was known as ‘The Albatross’ due to this phenomenal arm span. Sieben swam in Gross’s wake for the first 150 metres, but stormed home to win gold in one of the great upsets in Olympic history. Sieben set a new world record and improved his personal best time by over four seconds.

Sieben was named ABC Sports Star of the Year and won a scholarship to study business management at the University of Alabama. To complete a stellar year he was named Young Australian of the Year.