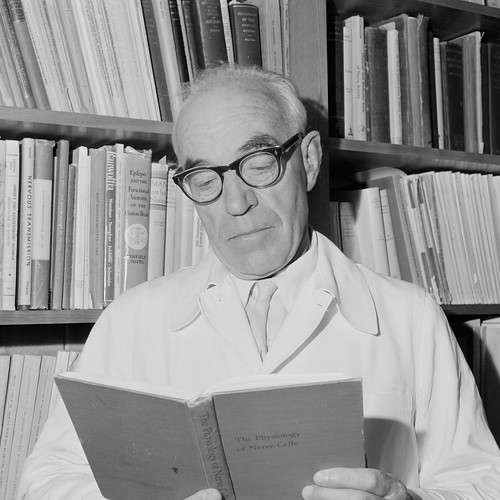 Sir John Eccles was a leading Australian neurophysiologist and the Foundation Professor of Physiology at the John Curtin School of Medical Research at the Australian National University. Born and educated in Melbourne, Eccles won a Rhodes Scholarship in 1925 and worked with the pioneering neurologist Sir Charles Sherrington at Oxford University. He subsequently worked in Sydney and New Zealand before moving to Canberra in 1951.

In 1963 Eccles shared the Nobel Prize for his pioneering work on the chemical means by which signals are transmitted by nerve cells. Shortly afterwards he was named Australian of the Year. To avoid compulsory retirement Eccles resigned from ANU in 1966 and continued his research career in Chicago and New York. He retired to Switzerland in 1975 and pursued his philosophical interest in the relationship between mind and body. He was close friend of philosopher Karl Popper, with whom he co-wrote The Self and Its Brain in 1977.