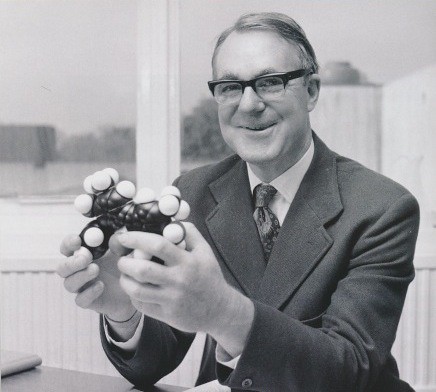 Winner of the Nobel Prize for Chemistry

Sydney-born John Cornforth showed the first signs of hearing loss at the age of ten and was completely deaf by his early twenties. He studied organic chemistry at the University of Sydney before winning a scholarship to study at Oxford. Cornforth’s future wife Rita Harradence won a similar scholarship and worked closely with him in his future research.

Australia offered no opportunities for research chemists who could not lecture, so Cornforth remained in Britain. He worked on the chemistry of penicillin during World War Two before joining the Medical Research Council in Hampstead. In 1962 he became a co-director of the Milstead Laboratory of Chemical Enzymology, where he conducted the research that led to his Nobel Prize in Chemistry for ‘work on the stereochemistry of enzyme-catalyzed reactions.’ Cornforth was elected to the Royal Society in 1953 and was knighted in 1977. He finished his career as a research professor at the University of Sussex.