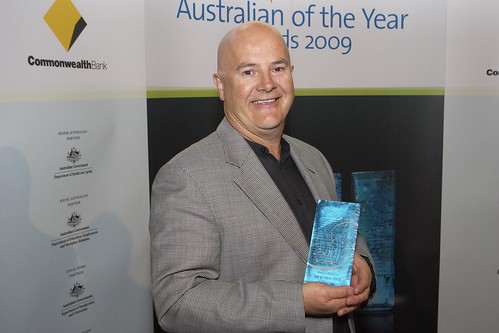 Graeme Drew is a professional fisherman from the small town of Bremer Bay in Western Australia. He is a tireless campaigner for ocean safety on the treacherous south coast. Graeme co-founded the local SES and successfully lobbied state and local governments to build a wharf for safe mooring at Bremer Bay. In 2003 Graeme’s nephew Nathan fell from a cliff while ocean fishing and was swept out to sea. After the official rescue was abandoned, Graeme led his family in a coordinated search and found Nathan’s body eight days later.

In memory of his nephew Graeme established the Nathan Drew Trust, which provides free hire of self-inflating buoyancy vests to fisherman. The trust has installed warning signs on dangerous sections of coast and promotes ocean safety through a school education program. It has also developed the prototype ‘Silent Sentry’ system, whereby lifebuoys are placed on dangerous cliffs and rescue authorities are automatically alerted when a buoy is used.