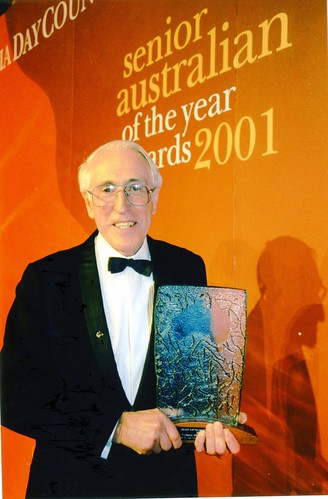 Pioneer of the Bionic Ear

Born in Camden, New South Wales, Graeme Clark studied medicine at the University of Sydney before training as an ear nose and throat surgeon in the United Kingdom. At the age of only 34 he was appointed a Clinical Professor at the University of Melbourne. Clark’s research focussed on the possibility that electrical stimulation of the auditory nerve might enable deaf people to understand human speech. He faced scepticism from the science community and a lack of funding, but persevered in his quest to produce a viable cochlear implant or ‘Bionic Ear.’ After clinical trials his device was approved for use in the United States in 1985 and has since been implanted in over 100,000 patients around the world. Clark founded the Bionic Ear Institute in 1983 and is regarded internationally as a pre-eminent scientist in his field.

When named Senior Australian of the Year he said, ‘I don’t think a medico, or a scientist, should really retire.’