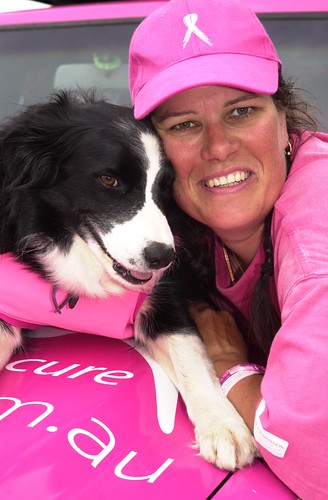 Deborah De Williams is the first woman to run a complete, non-continuous lap around Australia. She embarked on her massive 20,000 kilometre journey in 2009 with her border collie, Maggie, at her side. Together they ran from Hobart to Darwin via the east coast and raised $100,000 for the National Breast Cancer Foundation. Incredibly, Deborah completed the last 800 kilometres with two broken feet. In 2010, once her feet had healed, she began the second leg of her journey, running from Hobart to Darwin via the west coast and raised a further $82,000. She is expected to complete the second leg in March 2011. Deborah undertook this enormous feat to educate women about the importance of regular breast examination and screening. A breast cancer survivor herself, Deborah believes the early detection of her cancer helped increase her chances of survival, so with every step she is determined to raise awareness. This is not the first time Deborah has performed such an act. She was also the first woman to walk around Australia, raising funds for Kids Help Line. She broke five world records in the process. Her journey has given hope to women going through breast cancer, inspired survivors that there is life after cancer, and honoured the women who lost their lives to the disease.