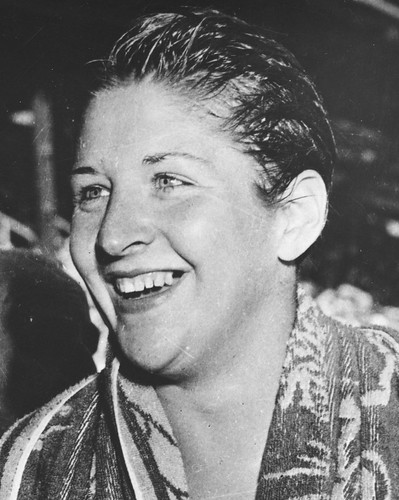 Dawn Fraser was born in Balmain, Sydney, and was spotted by swimming coach Harry Gallagher when she was fourteen years old. Gallagher later recalled that Fraser had ‘stacks of power and [was] completely uncontrollable.’ Fraser won her first national title in 1955 and won two gold medals at the Melbourne Olympics the following year.

She proceeded to become one of the greatest freestyle swimmers ever to compete. She swam a remarkable 27 individual world records and was the first woman to break the one-minute barrier for the 100 metres freestyle. She won eight Olympic medals, including the 100 metres freestyle gold at three successive games. Fraser resisted rules and regulations and often clashed with swimming officials.

When accepting her Australian of the Year award, she observed: ‘I have always been involved in a lot of controversy with officialdom, but I have always fought for something I believed in – myself as an individual.’