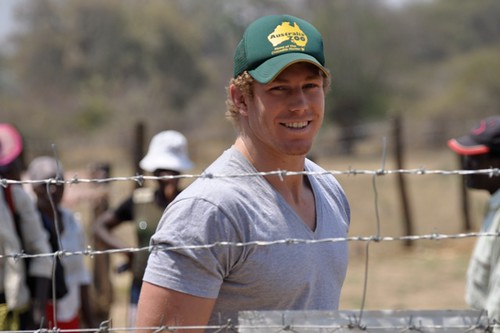 When he was 14, David Pocock’s life changed forever. Political upheaval in Zimbabwe saw his family evicted from their farm, forcing them to flee to Australia.  Just three years later, David’s prodigious talent as a rugby union player was spotted by Australian selectors and his career path was set. David captained the Australian rugby team’s under-20s at the junior world championships and in 2010 won the John Eales medal as Australia’s outstanding rugby player. David has never forgotten the struggles of the poor in his birthplace. In 2009, he and a close friend Luke O’Keefe established Eightytwenty Vision, a charitable foundation to help underprivileged people in rural Zimbabwe. David donates money and raises funds to improve the lives of the sick and the poor and returns to Zimbabwe regularly. The projects focus on health care for HIV and AIDS sufferers, education for children, food and water security, and human rights. An elite footballer with the world at his feet, David could have easily turned his back on his past. But his strong value system, integrity and sense of purpose in life are central to his character and his career in rugby enables him to create greater awareness of the plight of rural Africans.