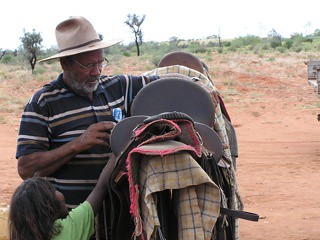 Barry Abbott is an Arrente stockman who has had remarkable success rehabilitating young male trouble makers and substance abusers of the outback. Barry established the Ilpurla Aboriginal Association a treatment outstation in a remote south-west corner of Central Australia in the seventies, and estimates that he has looked after about 300 boys over the years, some for as long as 12 months at a time. Drug abuse and petrol sniffing in particular are the main reasons young men end up at Barry’s station. A stockman by trade, Barry gives the boys the opportunity to become part of a working cattle station. They start work at day break and learn new skills like saddlery, vehicle and stock maintenance and break in horses. He instils in them a strong work ethic, discipline and a sense of pride and self-worth. Unlike other treatment centres, Barry accepts boys from anywhere, usually at the request of the Alice Springs courts, some arriving at his station still handcuffed. Barry is one of the hard men - uncompromising in his demands - but he also takes on the hard cases, the ones considered to be hopeless; boys who the doctors say could die at any time, and proves them wrong.